The collaborative efforts of Oak Ridge National Laboratory (ORNL) and two regional partners have resulted in more than $8 billion invested in the state of Tennessee by the electric vehicle (EV) industry since 2017, with 4,584 new EV-related jobs created.

ORNL, the Tennessee Valley Authority (TVA) and the Tennessee Department of Economic and Community Development (TNECD) collaborated to drive home why EV battery firms should locate their operations and innovate in Tennessee. The campaign supports Tennessee’s goal to build, own and drive more EVs than any other state and to have 200,000 EVs on the road by 2028.

Ultium Cells, a joint venture between General Motors and LG Energy Solution, committed more than $2 billion to build a battery cell plant in Spring Hill, Tennessee, which is expected to bring 1,300 new jobs to the state.

Perhaps the most impressive example — the largest single investment of economic activity in the state’s history, according to its governor — involves Ultium Cells, a joint venture between General Motors and LG Energy Solution.

In April 2021, Ultium Cells committed more than $2 billion to build a battery cell plant in Spring Hill, Tennessee, which will support a nearby GM assembly plant now being transitioned into the automaker’s third EV manufacturing site. The investment is expected to bring 1,300 new jobs to Tennessee.

The partners also leveraged RevV!, an innovation voucher program developed by ORNL to incentivize companies to work with the lab. Funded by the state, the voucher program serves three groups: new companies being recruited to Tennessee, existing companies of 10 or more employees looking to expand operations, and startups. The dollar value given to qualified firms varies depending on their category. 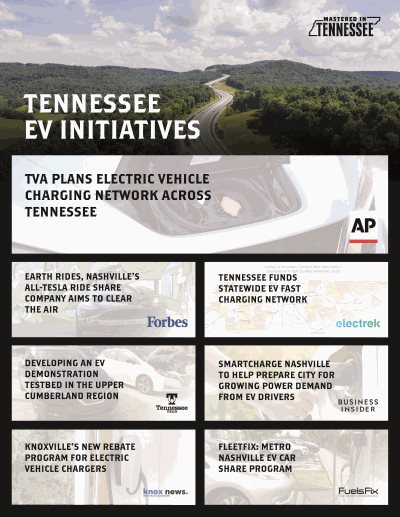 This image shows the first page of an interactive PDF that the team uses to encourage EV prospects to consider relocating to or expanding in Tennessee. Each section of the image links to an online news story.