A new method for constructing solar cells, developed at the National Renewable Energy Laboratory (NREL), could expand the reach of solar energy far beyond current applications.

Multijunction III-V solar cells, so called because they are made of elements from the III and V columns of the periodic table, have several features that make them ideal for weight- and space-constrained applications. They are light and flexible; they also absorb less heat and operate more efficiently than solar cells made from silicon. However, all of these benefits come with a major tradeoff—cost.

Current manufacturers of III-V solar cells use a historical growth process that offers precise control but is high cost and has low throughput. That process, metalorganic vapor phase epitaxy (MOVPE), uses complex molecules of organics and group III metals, combined with group V hydride molecules, to deposit metal atoms on a substrate (a surface that provides the base crystalline pattern for the layers of added material).

Hydride vapor phase epitaxy (HVPE) is another growth process for depositing III-V semiconductors. Instead of complex metalorganic molecules, HVPE uses inexpensive, elemental III-V metals (pure gallium, indium, etc.) that are bonded to chlorine and then deposited onto the substrate.

HVPE is the only III-V semiconductor crystal growth process that operates close to chemical equilibrium, meaning it can grow crystals more than 10 times faster than MOVPE at less than 10% of the cost. However, in high-quality solar cells, the interfaces between layers must be abrupt and well-defined. With such a high growth rate, HVPE has, until now, been unable to switch from growing one material to another abruptly enough to create high-performance solar cells.

The NREL team’s solution to the HVPE precision problem was simple, but game-changing: If traditional HVPE can’t grow high-quality interfaces because precursor gases can’t be swapped in the chamber quickly enough, why not leave the gases alone, create parallel chambers, and move the substrate between them? This led to the development of a modified HVPE process called Dynamic HVPE (D-HVPE).

The team constructed a lab-scale reactor to prove this concept. The reactor contains two vertical chambers, in which two different mixes of precursor gases could be maintained, connected by a horizontal transfer passage. In the passage, a flowing curtain of inert gas separates the precursor gases in the two chambers, while allowing the substrate to pass through. This lab-scale reactor successfully demonstrated the growth of abrupt interfaces, achieving similar quality interfaces as MOVPE-grown solar cells and a two-junction cell efficiency of 25%.

Together, all of these improvements have yielded a modified HVPE system that can grow multijunction III-V solar cells in less than four minutes, which would require one to two hours in an MOVPE reactor. Due to the increased deposition rate and simpler material chemistry, D-HVPE grown cells have the potential to be grown much less expensively than otherwise identical MOVPE-grown devices.

NREL has partnered with Kyma Technologies, a producer of semiconductor materials, and Ceres Technologies, a New York-based manufacturing and engineering company, to design and build a next-generation in-line D-HVPE reactor that will improve upon the proof-of-concept D-HVPE chamber described earlier. 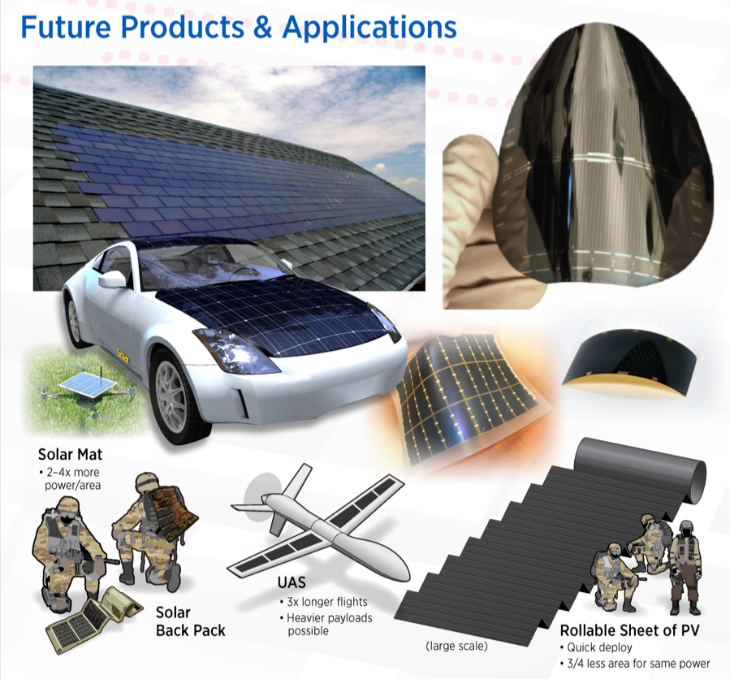