A new engine design for ships could help the Navy save money on fuel and logistics while improving safety and security with a reduced heat signature that makes the ship virtually undetectable to a heat-seeking enemy.

Those are the concepts underlying the revised Ericsson cycle engine designed by Geoffrey Kemmerer, a mechanical engineer with the Naval Facilities Engineering and Expeditionary Warfare Center (NAVFAC EXWC).

The benefits of the new engine are not necessarily limited to the Navy. Kemmerer says that his invention could improve marine shipping, railway transportation, electric power generation, and even refrigeration. Thus, any industry for which greenhouse gas production or fuel costs are major concerns can benefit from this invention.

Requiring half the fuel of a diesel engine and one third the fuel of a gasoline or steam engine, the new design will reduce the operating and logistical cost for any equipment with an engine, while doubling the range of Navy ships. With no thermal signature created by the exhaust, enemy combatants will have a hard time tracking fleet movement. The Ericsson Cycle engine can be solar powered, further reducing ships’ energy consumption, and when used in unmanned underwater vehicles (UUVs) it will reduce the cost of the power module to one-sixth the cost of fuel cells.

The one-piece construction and lack of seals make this a simple engine, and since the exhaust is close to the ambient temperature, the wasted energy is less than other engines.

This Ericsson cycle engine is more fuel efficient than any other engine while not being prohibitively expensive to build. This invention consists of isothermal compression, counter flow heat exchanger and isothermal expansion.

The compressor is based on a trompe, in which energy generated by falling water pressurizes air bubbles within the liquid. Instead of using the acceleration of gravity to build pressure, the new engine uses centrifugal acceleration to accommodate high pressures in a compact design. The types of liquid and gas used will depend on the application.

Energy from the liquid is recovered by jetting it through a nozzle at the outer edge of the compressor disk. The liquid is recovered and pumped through a filter and heat exchanger, mixed with bubbles and reintroduced into the engine. The gas exits the separation chamber near the center and is ported through the center of the shaft to the heat exchanger. The one-piece construction and lack of seals make this a simple engine, and since the exhaust is close to the ambient temperature, the wasted energy is less than other engines.

This revised Ericsson cycle engine uses 100% of the available energy for work. The very small external heat signature comes only from the energy the compressor cooling fluid absorbs during the compression stage. This higher efficiency means ships could increase their range for the same amount of fuel, and expeditionary units could carry less fuel with them. As a bonus, the engine can be configured to run on any heat source, including solar and geothermal. 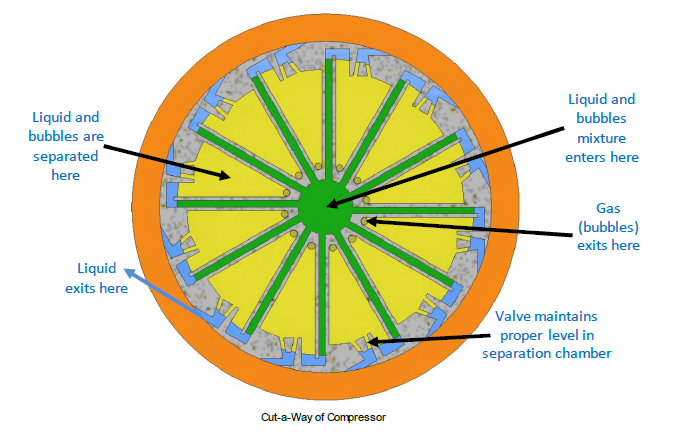