A new technology developed by the Naval Surface Warfare Center, Indian Head Division (NSWC IHD), to neutralize homemade explosives (HMEs) is now commercially available for use by civilian public safety and law enforcement personnel as well as the military.

HMEs are a common and persistent problem for U.S. warfighters overseas and for emergency responders domestically. HMEs are extremely sensitive and unpredictable; a stray spark, a change in temperature, exposure to sunlight, or even an accidental bump can initiate a detonation.

Silent Spring shields volatile explosive materials from these potential triggers, enabling the military to safely clear an HME from a transit path, for example, or for civilian explosives technicians to safely move a device to another location for forensic analysis.

Silent Spring is a thick, semiliquid substance that is poured over an explosive device, desensitizing the energetic components by surrounding them with a rubbery material that minimizes the effects of external triggers. The technology gets its name from its ability to keep a volatile explosive device “silent,” and the fact that the rubberlike material springs back to its original form after an impact.

The partnership has already provided hundreds of product units to DoD end users for demonstration and training and will shortly do the same for the civilian public safety and law enforcement communities.

Father-and-son entrepreneurs Stephen and Tommy Luginbill, who had previously licensed a chemical decontamination technology from a different Navy lab, founded a startup called Grey Ops in 2017 specifically to commercialize the Silent Spring technology.

The transfer involved a string of successful tech transfer mechanisms facilitated by Chris Wilhelm, the NSWC IHD Office of Research and Technology Applications manager (ORTA). A Cooperative Research and Development Agreement (CRADA), a license agreement, and the lab’s designation as a Center of Industrial and Technical Excellence all helped justify a special public-private partnership (P3) agreement. Signed in 2019, the P3 agreement established a unique relationship in which NSWC IHD would produce the Silent Spring material in bulk, maintaining quality control, and Grey Ops would package and sell the end product.

A Partnership Intermediary Agreement with NSWC IHD helped enlist support from the College of Southern Maryland. Finally, Grey Ops signed an agreement with Atlantic Diving Supply to distribute the product.

Silent Spring is now available commercially and is approved within the Department of Defense (DoD) to address the highest priority explosive ordnance disposal (EOD) threats. The partnership has already provided hundreds of product units to DoD EOD end users for demonstration and training and will shortly do the same for the civilian public safety and law enforcement communities.

Grey Ops is helping to attract other businesses to its location in Indian Head, Maryland — which has been designated by the state as an “opportunity zone” — to improve the economic conditions of this underserved community. The U.S. Bomb Technician Association, for example, has established two multiuse facilities for bomb disposal technology development, training and collaboration, as well as high-paying, technology-focused jobs in Indian Head. 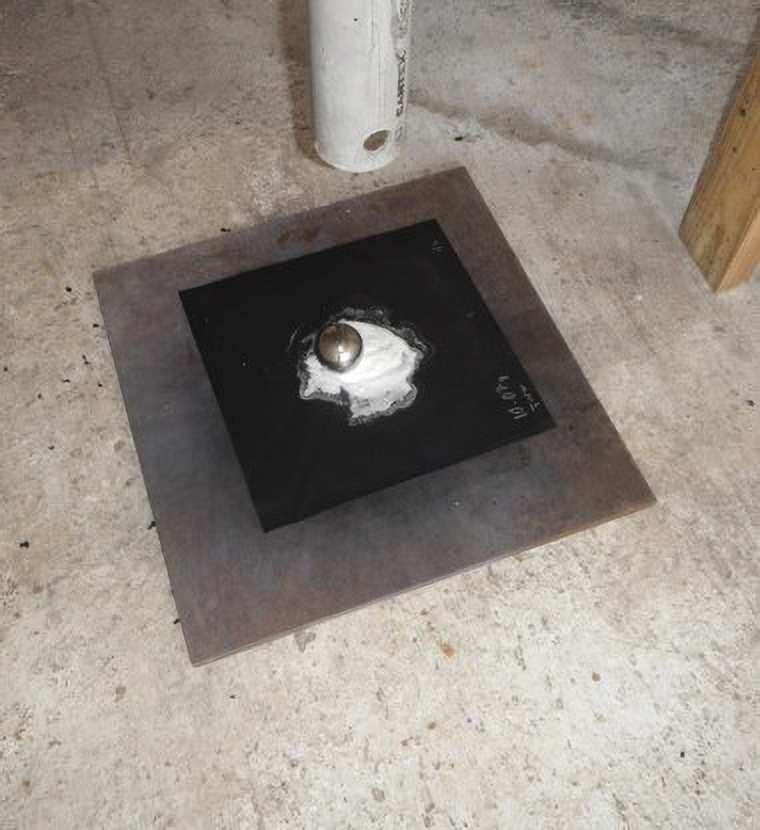 Treating triacetone triperoxide with Silent Spring prevents the violent reaction that would normally occur when a 1.8 kg steel ball is dropped 7 feet onto a 15 g sample of the explosive.