Despite dramatic advancements in combat medicine, medical litters or stretchers have changed little over the conflicts of the past century, and surgeons in far-forward situations often are unable to use standard surgical tools in the absence of an operating room table equipped with a retractor, arm boards, intravenous poles, lights, and other instruments.

Conceived by two U.S. Army combat surgeons, the SHRAIL™ (Sirkin-Hiles Rail) medical device is a lightweight rail system that allows medical personnel to attach a small surgical rail to the side of a standard litter that, in turn, serves as a standard attachment point for any needed medical equipment.

Consisting of four anodized aluminum rails with color-coded locking nuts, the SHRAIL weighs 15 pounds and can be collapsed and carried in a backpack, making it available in a broad range of battlefield scenarios.

Despite the seeming simplicity of the solution, previous efforts to create a portable, lightweight support system for surgical tools on standard litters had failed. What Army Col. Jason Hiles and Maj. Max Sirkin did was envision an elegant, easy-to-assemble solution that met the size, weight, and time constraints of medical personnel operating in austere combat and far-forward scenarios.

The SHRAIL™ was a perfect fit to expand the company’s product line and provide a resource for purchase of the product for the military.

Morzine Medical, which manufactures other austere surgical products including a stationary operating table, developed a commercially available SHRAIL™ and is preparing to market it as a commercial off-the-shelf product. The company proved to be an ideal partner to commercialize the USAMMDA technology, having already successfully penetrated the field medicine market through U.S. military sales of its Doak M4 Portable Surgical Table. The SHRAIL™ was a perfect fit to expand the company’s product line and provide a resource for purchase of the product for the military.

Along with helping to save lives in combat situations, the technology has commercial applications, including remote search-and-rescue operations, humanitarian efforts, and the ability to create overflow critical care capacity in civilian hospitals in the event of a mass casualty event.

For the U.S. Army, commercial transfer is a necessary component of ensuring that the SHRAIL meets its potential of saving the lives of seriously injured warfighters in combat settings or remote locations. Licensing the patented technology to a commercial developer exploring these potential markets makes it far more likely that the lifesaving device will be manufactured at scale and made available to the military to assist austere medical operations in combat and far-forward situations. 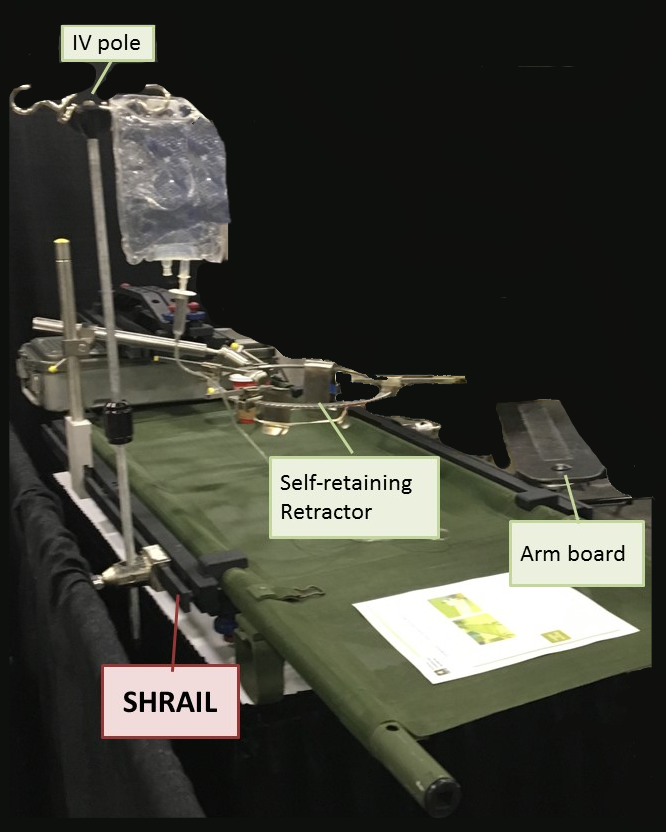