High temperatures are problematic and difficult for many to handle. Technical experience acquired from Crowd Rx, 2019 CRADA partner, and First Line Technology, 2020 licensing partner is being used to minimize a variety of heat related deaths. CrowdRX, often treats patients with symptoms of heat-related illness due to environmental and drug-induced conditions. Summer concerts can be hot. People exert themselves with dancing. Attendees sometimes experiment with “recreational drugs” like ecstasy, which can cause a condition called psychostimulant drug-induced toxicity (PDIT). PDIT can lead to a loss of control over body temperature which results in extremely high fevers - core body temperatures over 107°F. CrowdRX’s goal for using the BCS was to improve upon existing methods and equipment used for treating heat-related injuries.

Previously, they used plastic children’s pools packed with ice to lower core body temperatures of patients – a practice both inconvenient and inefficient. CrowdRX’s objective was to determine if the easy to transport, adjustable height, effective and efficient BCS could provide a solution to a problem they experienced regularly. The USAMRDC T2 team’s goal was to field test the device in new settings to provide proof of concept and data, and their objective was to make additional improvements to the design.

The BCS was also field tested through two internal agreements with these recipients: the U.S. Infantry Regiment from Fort Myer, VA, used at the National Memorial Day Observance event in May 2019; and the U.S. Marine Corps Camp Johnson Branch Medical Clinic at the Naval Medical Center Camp in Lejeune, NC, and used continuously during strenuous outdoor activities and training from May-October 2019. These agreements also helped to meet the lab’s goals and objectives by providing the lab with actual use feedback from field testing (that oh so critical data necessary for ongoing marketing to industry and making improvements). Benefits for the Infantry Regiment and Marine Corps included access to a practical medical device to help alleviate potential EHI at their events and training facilities located in hot, humid climates. First Line Technology (FLT), a medical supply company based in Virginia that designs and manufactures disaster preparedness and emergency response equipment signed an exclusive patent license agreement with USAMRDC. Initial product evaluations between FLT and USAMRDC T2 professionals began in 2014. Those initial talks stalled, but set the framework for future partner negotiations. Always open to innovation, FLT developed immersion cooling equipment based on the original AICS patent design. In July 2019 USAMRDC introduced FLT to a second generation design. FLT choose to license the BCS technology patent to access the advanced development prototype improvements and enhance their line of commercial products. Per the agreement, a second generation BCS product will be introduced in 2021.

The true essence of the excellence in technology transfer featured in this nomination revolves around the steadfast determination of the inventor and T2 staff to get the lifesaving Body Cooling System into widespread use. Licensing inventions sometimes requires the maturation of the technology, including field testing to derisk it.

The T2 mechanism by which they started the process was a Commercial Evaluation License to First Line Technology. The prospective licensee did not execute a full license until after the technology was improved and field validated. The cooperative research and development agreement (CRADA) between the USAMRDC Medical Technology Transfer Office and CrowdRX, Inc. proved instrumental. In addition to the CRADA, two internal use agreements enabled field-testing at military events and t raining facilities. All three of these agreements provided data and pushed improvements to the technology, leading to the execution of the patent licensing agreement between USAMRDC and First Line Technology.

Attendance at tradeshows is an important opportunity for T2. CrowdRX and the USAMRDC Medical Technology Transfer Office professionals met at the EMS Today Conference in National Harbor, Maryland, on February 20-22, 2019. Both groups had booths. A medic from CrowdRX saw the BCS display at the USAMRDC booth, was intrigued and urged Mr. Marchessault to visit the CrowdRX booth to talk to the company’s COO about the BCS technology. Mr. Marchessault followed up and met Mr. Connor Fitzpatrick, CrowdRX Chief Operating Officer. This encounter kicked off what would become a mutually beneficial partnership between the two entities around the BCS.

Following the conference, Mr. Marchessault and Mr. Fitzpat rick continued discussions over the phone resulting in the drafting and execution of a CRADA allowing for CrowdRX to use a BCS prototype at five major events during the summer of 2019. Specifically, the term of the CRADA ran from June 13-September 30, 2019 – encompassing all the dates of the festivals and concerts at which CrowdRX planned to pilot the BCS. Mr. Marchessault shipped the BCS prototype to Washington State, where the first event took place. Over the course of the summer CrowdRX utilized the BCS as part of their medical equipment at large events in June, August and September in four states (Washington, Nevada, Ohio and Maryland). These events spanned multiple days and nights and drew tens of thousands of people.

Intoxication resulting from the use of certain illicit psychostimulant drugs may lead to a life-threatening medical condition in which the person experiences a severe increase in body temperature, metabolic abnormalities, rapid heart rate, aggressiveness, delusions, convulsions, or even coma.

The current standard treatment for this serious condition is limited to body cooling by external methods and implementation of supportive measures, such as intravenous fluids and respiratory support.

At the very first summer concert event, CrowdRX successfully utilized the BCS to treat a PDIT patient. By submerging the entire PDIT patient in the BCS reservoir, and in combination with other treatments, the patient’s core body temperature was lowered from a life-threatening 107.7°F. At another event later in the summer the device was used in a similar situation, again lowering the patient’s dangerously high body temperature as part of the treatment for PDIT. The BCS, partly because it can be adjusted to a convenient height, affords multiple medical personnel simultaneous access to administer various treatments to the patient submerged in the BCS.

These two lives saved are the driving force behind the USAMRDC T2 office’s steadfast determination to transfer the BCS into widespread use. Lives are at stake and will be saved.

The CRADA between USAMRDC Medical Technology Transfer Office and CrowdRX has allowed CrowdRX to field test something that works much better than the status quo for quickly lowering the body temperature of patients in the field. For USAMRDC, the CRADA provided valuable feedback on the technology, specifically leading to advanced developments on the existing patent. That feedback has been extremely positive and has also allowed for some suggestions to tailor the device for different situations. For example, CrowdRX has requested a longer, wider and deeper reservoir, to better fit a PDIT patient. Not all concert goers are as skinny as our Warfighters.

While PDIT-induced high body temperatures may not have been initially on the Technology Transfer professional’s radar screen, Mr. Marchessault recognized a unique opportunity for partnership with CrowdRX and worked hard to establish a CRADA before the summer event season started. The outdoor concerts offered a chance to make the BCS available in locations where thousands of people had the potential to be affected by exertion, high temperatures and humidity, and as it turns out, dangerous drug reactions. The BCS proved invaluable in saving two lives because it was available to trained professionals from CrowdRX in situations where they needed it most. 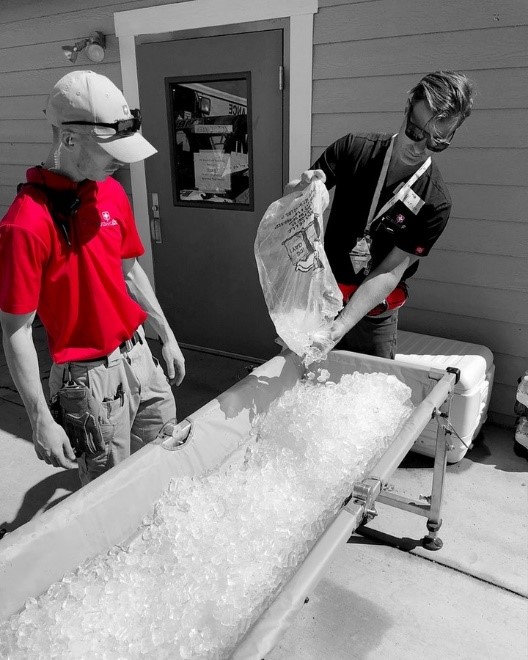