This year, the world’s first zero-emission passenger ferry is expected to begin operating in the San Francisco Bay, propelled by hydrogen fuel cell technology investigated for marine applications by Sandia National Laboratories and a fleet of collaborative commercialization agreements.

The Water-Go-Round is a 70-foot ferry that will carry up to 84 passengers at speeds of up to 22 knots, powered by two 300 kW (400 horsepower) shaft motors. This ferry will demonstrate the maritime potential of hydrogen fuel cells to the commercial and regulatory communities.

For 15 years, Sandia’s Hydrogen and Fuel Cells research program has evaluated the feasibility of using hydrogen fuel cells in a variety of applications, including pier-side port power. Following an inquiry from a San Francisco ferry boat operator in 2014, Sandia scientists examined the use of hydrogen on maritime vessels.

With the commercial maritime sector contributing as much to global carbon dioxide (CO2) emissions as aviation, new international shipping regulations are designed to reduce emissions. The maritime industry is looking at alternative fuels as a way to maintain operational flexibility, commercial viability, and regulatory compliance. This ferry will demonstrate the maritime potential of hydrogen fuel cells to the commercial and regulatory communities.

The maritime industry is looking at alternative fuels as a way to maintain operational flexibility, commercial viability, and regulatory compliance.

Using domestically produced hydrogen in fuel cells is a zero-emission pathway to meeting cost and regulatory challenges. Fuel cells also have other advantages over conventional diesel engines, including higher energy efficiency, quiet operation and no risk of contaminating fuel spills.

The US Department of Transportation’s Maritime Administration funded Sandia’s work, performed in collaboration with commercial US naval architects (Glosten and Elliott Bay Design Group, both of Seattle) and maritime regulatory bodies (US Coast Guard, American Bureau of Shipping and international classification society DNV GL). Each project was built upon the last to show that hydrogen fuel cells could power boats of various types and sizes, safely and economically, all with zero vessel emissions. The success of these projects also leveraged past efforts co-sponsored by the US Department of Energy’s Fuel Cell Technologies Office, aimed at demonstrating fuel cells for shore-side power needs.

In 2017, as part of the lab’s Entrepreneurial Separation to Transfer Technology program, one of the scientists, Joe Pratt, left Sandia to launch start-up company Golden Gate Zero Emission Marine (GGZEM). GGZEM began construction of the Water-Go-Round at the shipyards of Bay Ship & Yacht in Alameda, California.

The Water-Go-Round is being funded by SW/TCH Maritime, an impact investment platform building the first fleet of maritime vessels dedicated exclusively to decarbonization, and a $3 million grant from the California Air Resources Board through the Bay Area Air Quality Management district. This project is also supported by the California Climate Investments program. As part of the project, Sandia has a Cooperative Research and Development Agreement (CRADA) with GGZEM to independently measure the performance of the fuel cells on the Water-Go-Round. 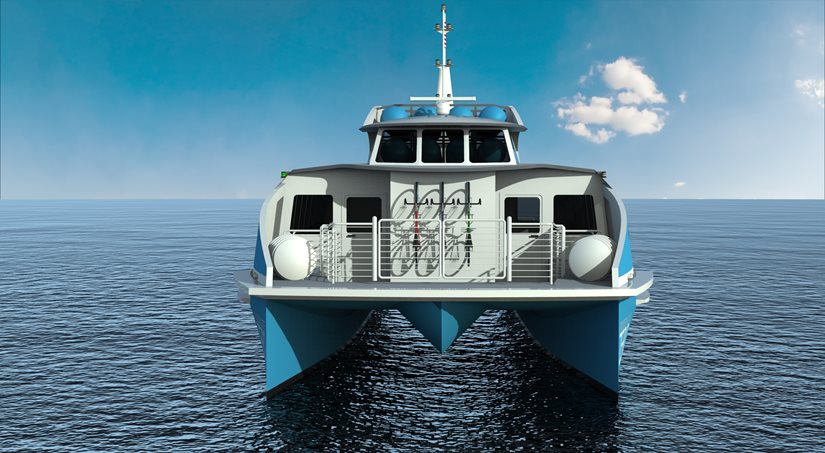