Zotiraciclib is an investigational cancer drug that is being evaluated for the treatment of glioma, a type of brain tumor that begins and develops in glial cells. Glial cells are specialized cells that surround and support neurons (nerve cells) in the brain. Glioma represents 80% of all malignant primary brain tumors; types of gliomas include astrocytoma, ependymoma, and oligodendroglioma. Zotiraciclib is a small molecule that inhibits multiple proteins called kinases that regulate various cellular processes, including the cell cycle, DNA transcription, DNA damage response, signal transduction, etc. Zotiraciclib shuts down several specific pathways that glioma cells use to replicate and survive.

Gliomas are characterized by their intrinsic heterogeneity, high morbidity, and mortality. The overall survival for patients with glioblastoma is only 14-16 months. Despite recent advances in surgical techniques, radiation and chemotherapy, this disease remains incurable. Standard therapy for patients consists of extensive surgery, if surgery is possible, followed by radiation therapy in combination with Temozolomide. However, most patients experience relapse, and the median survival is less than 15 months. Thus, there is a large unmet need for the development of effective treatments of gliomas, and zotiraciclib is a therapy being developed to address this unmet need.

Glial cells are specialized cells that surround and support neurons (nerve cells) in the brain.

The recipients of the technology: The recipients of the technology are patients with recurrent malignant glioma, a rare, hard-to-treat cancer of the brain. Gliomas are difficult to treat and are resistant to existing treatments; current treatment options are limited (surgery, radiotherapy, and chemotherapy); and the outcomes are poor. With the current standard treatment of radiotherapy and Temozolomide, less than one third of patients survive beyond two years, and cures are exceedingly rare. NCI patients in a Phase 1 clinical trial were treated with zotiraciclib and Temozolomide.

The partnership was co-initiated by Tragara Pharmaceuticals (now Adastra Pharmaceuticals) and NCI’s Dr. Mark Gilbert, Chief of the Neuro-oncology Branch (NOB), for preclinical studies of zotriaciclib. Dr. Jing Wu, a Tenure Track investigator in the NOB, performed the preclinical studies, which have been published in Clinical Cancer Research (2018 Mar 1;24(5):1124-1137). The positive data from these preclinical studies led to the initiation of an NCI clinical study of zotiraciclib under the direction of Dr. Jing Wu. Additional studies are being conducted to evaluate zotiraciclib in subsets of gliomas to investigate the selective vulnerability of these tumor subsets that have unique molecular profiles to zotiraciclib. These studies support the clinical trial and the development of correlative studies for a potential multi-center, Phase II clinical trial.

In April 2015, NCI executed a CDA with Tragara Pharmaceuticals to discuss a possible collaboration using zotiraciclib.

In September 2015, an MTA was executed for Dr. Gilbert’s and Dr. Wu’s laboratories to conduct preclinical studies of zotiraciclib to determine if this compound should be advanced to clinical studies. Zotiraciclib was evaluated for its anti-tumor effects in gliomas with different molecular features using in vitro cell model studies and animal models. Zotiraciclib was also combined with Temozolomide to see if the combination of these two agents would result in synergistic anti-cancer effects.

In April 2016, a CTA was executed under the direction of Dr. Wu for the first clinical study of zotiraciclib in patients with brain tumors, with all dose escalation studies done at NCI. The study’s objective was to find out if zotiraciclib is safe, and to find out if it is as effective (or more effective) in combination with Temozolomide, the current standard of care.

NCI played a key role in conducting several preclinical studies that provided the foundational data to support conducting a clinical trial of zotiraciclib. Based on positive data from these basic and translational preclinical studies, NCI rapidly initiated the first clinical trial of zotiraciclib in brain tumor patients at the NIH Clinical Center. Additionally, the FDA and the European Medicines Agency (EMA; the FDA equivalent in Europe) have granted orphan drug designation to zotiraciclib in the treatment of glioma due to the condition of gliomas being considered a rare disease or condition, which is one that affects less than 200,000 persons in the United States or 10,000 persons in the European Union.

One aspect of the excellence in the technology transfer effort is the speed with which the various agreements were negotiated and executed. These technology transfer efforts led zotiraciclib to be more rapidly translated from the bench (preclinical experiments) to the bedside (first clinical trial in brain tumor patients). For example, the company’s MTA template was negotiated and executed in 8 days. Similarly, the CTA was negotiated and fully executed in 2 months, which is significantly faster than a typical CTA negotiation. A rapid execution of the CTA allowed the NCI clinical trial to begin without delay.

Another aspect of the excellence in the technology transfer is Dr. Pollack’s role in helping to resolve issues and concerns involving the review of press releases and the provision of NCI’s study data. On different occasions, Dr. Pollack discussed issues with the NCI investigators and Adastra Pharmaceuticals in phone call and emails, and he crafted emails and memos to clarify and explain terms in the CTA to different NCI and Adastra staff. Technology transfer advanced the collaboration by serving as a bridge between the development efforts and clinical priorities of Adastra and the scientific concerns of the NCI investigators.

The development of zotiraciclib furthers the NCI’s mission to advance discovery and advancement of new cancer treatments, especially for the treatment of rare cancers such as gliomas which may not benefit from large public financial support. The partnership between NCI and Adastra Pharmaceuticals allowed the partners with complementary expertise to come together to meet the mutually beneficial goal of developing and commercializing a novel cancer therapy to treat gliomas.

The partnership brought together a combination of Adastra Pharmaceuticals’ proprietary anti-cancer agent and NCI’s expertise in research, design and execution of preclinical and clinical trials, resulting in the development and clinical application of a new cancer treatment.

The FDA and EMA’s orphan drug designation of zotiraciclib to treat glioma represents an additional regulatory acknowledgement for this agent. The Orphan Drug Designation program provides orphan status to drugs and biologics which are defined as those intended for the safe and effective treatment, diagnosis or prevention of rare diseases/disorders that affect fewer than 200,000 people in the U.S. and not more than five in 10,000 in the E.U. Orphan Drug Designation provides important incentives, including marketing exclusivity upon approval and tax credits for qualified clinical testing, as well as regulatory agency fee exemptions and reductions.

Gliomas are difficult to treat and are resistant to existing treatments; current treatment options are limited (surgery, radiotherapy, and chemotherapy); and the outcomes are poor. With the current standard treatment of radiotherapy and Temozolomide, less than one third of patients survive beyond two years, and cures are exceedingly rare. While the use of zotiraciclib to treat glioma is still investigational, in clinical trials it is addressing an unmet need.

Adastra is currently focusing on the development of zotiraciclib to treat gliomas and diffuse intrinsic pontine glioma (DIPG). But in addition to glioblastoma and DIPG, zotiraciclib has the potential to target multiple cancer indications, including hepatocellular tumors, as well as breast, ovarian, colorectal, pancreatic, and gastric cancer. NCI has found that zotiraciclib has multiple mechanisms of action, such as effects on several survival mechanisms used in tumors and effects on the production of the energy-carrying molecule adenosine triphosphate (ATP). Since zotiraciclib targets multiple components of tumor cell survival and proliferation, it may enhance the ability to kill cancer cells and may reduce the potential for cancers to develop resistance to therapies – a particular challenge in treating glioblastoma. 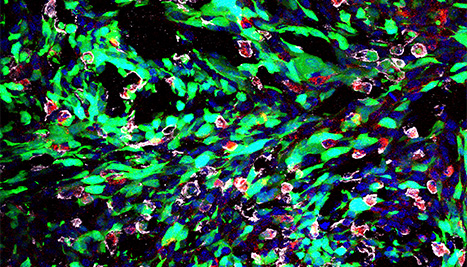