EPA partners with WaterStep on clean-water system for disaster response

For most of its 50-year history, the Environmental Protection Agency (EPA) has provided aid to areas affected by hurricanes and other natural disasters. Now those efforts include a portable, cart-based system that can generate thousands of gallons of clean water per day and even make its own bleach.

The Water-on-Wheels (WOW) treatment system, jointly developed through a technology transfer agreement by EPA and Kentucky nonprofit WaterStep, has been aiding disaster relief efforts since 2017. Most recently, it was deployed in New Orleans after Hurricane Ida and in the wake of tornado damage in Western Kentucky.

In the wake of a hurricane, reservoirs and other traditional sources of clean water can become polluted, power outages can disrupt local treatment systems, and damage to roadways can limit responders’ ability to get clean water to those who need it. This happened when Hurricane Maria hit Puerto Rico in 2017. Modified versions of the WOW cart were deployed in pick-up trucks to each of the 78 municipalities in the territory, and residents were quickly trained to operate them.

WOW runs on power from standard electricity, a dual-fuel generator, a battery, or solar power to produce 10,000 gallons of water per day, along with liquid bleach for sanitation.

In 2019, a WOW cart was dispatched to Lake Charles, Louisiana, where the entire water distribution system was compromised for three weeks after losing power during Hurricane Laura. WOW produced more than 100,000 gallons of water for food preparation, showering, and laundry. More than 16,000 meals for emergency responders and residents were prepared daily using treated water from the WOW cart. The mobile system also generated 50 gallons of bleach solution used in cleanup efforts.

The BleachMaker component of the WOW system—originally developed in 2014 to fight the Ebola outbreak in Liberia—also proved useful during the COVID-19 pandemic, when sanitation supplies ran low. This exposure has improved WaterStep’s ability to extend into additional markets with critical water and sanitation needs.

In 2020, the Texas Roadhouse restaurant chain became WaterStep’s first corporate partner and purchased its own WOW cart as insurance for its 100-plus locations that are in hurricane zones. That move paid off the following year after Hurricane Ida struck, when Texas Roadhouse dispatched its new system to New Orleans while WaterStep deployed another to Houston.

For more information about the technology transfer effort behind this success story, contact the EPA tech transfer staff at [email protected] 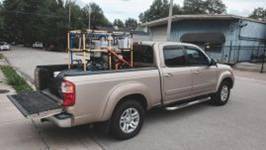 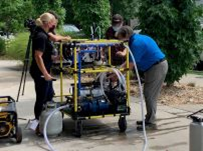