With a deployment history that included the 2001 anthrax attacks and the Boston Marathon bombing, a decontamination technology developed at Sandia National Laboratories was well positioned to assist first responders once again during the COVID-19 pandemic.

The environmentally friendly, fast-acting chemical product, called DF-200, is 99.99999% effective against a variety of bacteria, viruses and spores in a research lab setting. Acting like a detergent, DF-200 penetrates the respiratory fluids surrounding a virus and neutralizes the viral RNA so there is no potential for further infection.

DF-200 was used in federal and private office buildings after the 2001 anthrax attacks in Washington, D.C., and New York City, and later as part of Operation Iraqi Freedom. Since then, it has aided the response to numerous real-world incidents, including the Ebola outbreak in Dallas and the Boston Marathon bombing. The technology was licensed to multiple companies so it could be produced for a variety of markets as well as national security applications.

During the COVID-19 pandemic, DF-200 products manufactured by several licensees were used to disinfect facilities used by the public. Since it is non-corrosive, it is particularly suited for use on high-traffic surfaces, which must be repeatedly decontaminated. 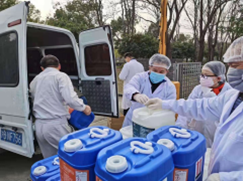 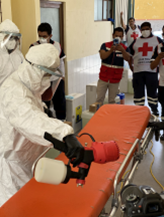