A partnership between the Navy and a veteran-owned small business is making the world a safer place with a technology developed to train bomb-sniffing dogs.

Homemade explosives are generally composed of two components, an oxidizer and a fuel. When mixed, the substance is volatile and at risk of detonation. This means the mixture cannot be used to teach detector dogs to identify a homemade explosive by its scent.

The new training aid, now commercialized as Odor Trace, keeps the individual components separated within a container, then mixes the released vapors to mimic the scent of an actual homemade explosive for safe canine training. Although originally developed for military use, the technology has potential civilian applications for training dogs working with law enforcement and public safety personnel.

"Safety in public places is on many people's minds these days," said Lauryn DeGreeff, the NRL chemist whose research team invented the technology. "Commonly used explosive detection instruments were not developed for the identification of these homemade explosives. Canines, however, can easily be trained to locate such materials, and the MODD can be used to assist in properly training canines [them]."

Per Vivo Labs in Kingsport, Tennessee, licensed the patented Navy device in May 2017 and worked with two other local businesses to bring Odor Trace to market five months later.

"Partner support from Short Fuse Engineering located in Church Hill and Master Tool and Die of Kingsport have allowed Per Vivo Labs to quickly move from prototype to production quickly," said Russ Hubbard, an Army veteran and founder/CEO of Per Vivo Labs, told the Kingsport Times-News.

Odor Trace is the second military technology that Hubbard has licensed. In February 2017, Per Vivo Labs finalized a license for the Army’s rate-activated tether technology. 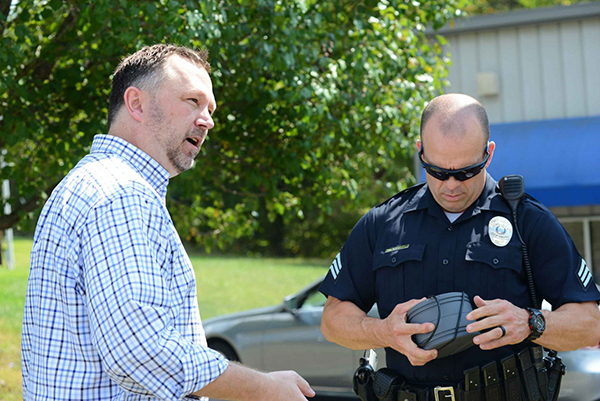