One of Americans’ favorite edible fish can now be raised more sustainably and less expensively thanks to a new disease-resistant tilapia strain developed through selective breeding by the U.S. Department of Agriculture (USDA) and two industry partners.

Farm-raised tilapia is a mild-flavored, lean fish that is easy to prepare, helping make it the fourth-most consumed fish in the U.S. That demand regularly exceeds the supply available from U.S. aquaculture farms, leading to about $1 billion per year spent on imported tilapia. Domestic supplies of Nile tilapia—the quick-growing species favored by many farmers —have been depleted by its susceptibility to three bacterial diseases.

These bacteria cost the global tilapia market more than $1 billion per year in losses and are difficult to treat without antibiotics, which are expensive and controversial. Tilapia also are not ideal candidates for vaccines, which can be difficult and labor-intensive to administer in young fish.

Researchers from the Aquatic Animal Health Research Unit (AAHRU) within the USDA Agricultural Research Service found that their expertise in studying disease resistance in fish complemented the strengths of two companies: Spring Genetics, which has expertise in tilapia breeding and production, and Benchmark Genetics Norway, which specializes in the genetics of selective breeding.

AAHRU researchers partnered with those two companies to identify a genetic marker for disease resistance in Nile tilapia and promote breeding among fish with that marker. This was a notable improvement over the previous method of identifying disease resistant fish: infecting them to see which ones survived.

Through multiple technology transfer agreements, the partnership led to the development of a new strain called Spring Tilapia®, which is 34% more likely to survive infection by any of the three bacteria. As a bonus, the healthier fish grow just as quickly as Nile tilapia.

Spring Tilapia are produced and sold in North America, Central and South America, Africa, and Asia. Spring Genetics ships young tilapia directly to producers in the USA, Canada, the Bahamas, and the Dominican Republic for commercial production. Distributor agreements are also in place in Guatemala, El Salvador, Colombia, Brazil, Bangladesh, Angola, and Zimbabwe. 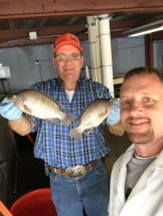