Imagine an airport security checkpoint where all travelers can keep their coats and shoes on. A technology recently licensed for commercialization will allow travelers to do just that, thanks to an innovative collaboration that involved three federal agencies, an industry partner and a $1.5 million crowdsourcing competition.

In March 2021, the Pacific Northwest National Laboratory (PNNL) of the Department of Energy (DOE) licensed the High Definition-Advanced Imaging Technology (HD-AIT) platform — including an on-person screening system and a shoe scanner — to Liberty Defense Holdings of Atlanta on behalf of the DOE and the Department of Homeland Security (DHS). The platform was developed as part of an interagency effort by PNNL and Sandia National Laboratories of DOE, the Science and Technology Directorate (S&T) and Transportation Security Administration (TSA) of DHS, and the National Aeronautics and Space Administration (NASA).

Liberty Defense intends to manufacture the platform in a way that seamlessly upgrades the HD-AIT platform, to not disrupt the current airport security footprint.

The DHS S&T’s Screening at Speed Program, which facilitates the development and deployment of aviation security solutions, partnered with PNNL and funded the development of an improved on-person screening system and an accompanying scanner that could image through shoes. The PNNL team, which developed the original holographic millimeter wave system currently used at airports worldwide to detect threats hidden under clothing, was funded by DHS S&T to perform the research and development of the new HD-AIT system.

Both systems will reduce the need for people screened at airports and large public events to remove outerwear and shoes, which can make screening more efficient while remaining aligned with TSA requirements.

The HD-AIT system provides higher resolution images, improves detection, reduces false alarms and is built on a flexible, open architecture that aids rapid updates. The shoe scanner system is built on the same technology but is specifically configured to screen upward through a passenger’s shoes. Both systems will reduce the need for people screened at airports and large public events to remove outerwear and shoes, which can make screening more efficient while remaining aligned with TSA requirements.

Development of the new screening system was a collaborative process that included:

In January 2021, TSA, DOE and S&T collaborated to create a licensing agreement framework that was implemented by PNNL for the license with Liberty Defense. The agreement grants exclusivity for three years and requires that licensees build systems compliant with government-owned detection algorithms. 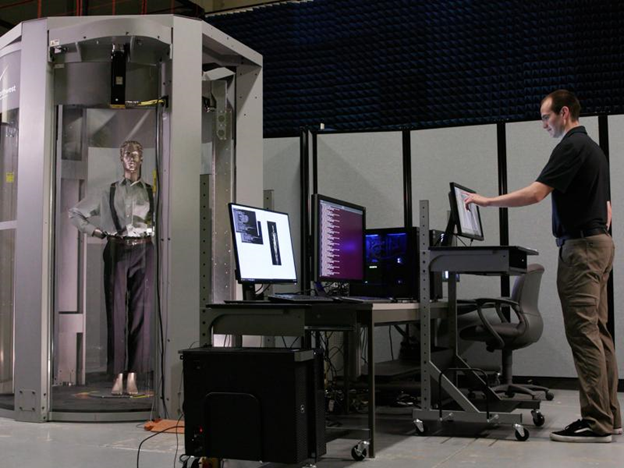 DHS, DOE’s Pacific Northwest National Laboratory and Sandia National Laboratories, and NASA formed an innovative partnership to advance the commercialization and implementation of a high-definition advanced imaging system that can dramatically improve accuracy and efficiency of airport and large-event security screening.