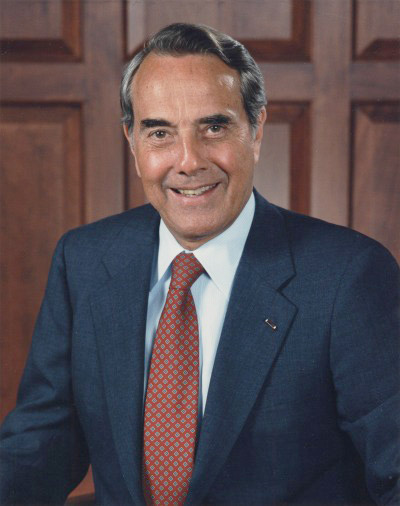 Former Kansas Senator Bob Dole, a World War II Army veteran who served in Congress for 35 years, will be remembered in the FLC community for coauthoring legislation that greatly increased the economic and societal impacts of federally funded inventions.

Dole, 98, passed away on December 5, 2021 – one week short of the 41st anniversary of the Bayh-Dole Act of 1980, which he co-sponsored with Indiana Senator Birch Bayh.

Just one of Dole’s many legislative achievements, the law helped revive the U.S. economy by streamlining public-private sector collaboration and incentivizing the development of products discovered with federally supported research. Its lasting impact has been particularly evident during the recent COVID-19 pandemic, as those partnerships facilitated the rapid development of life-saving treatments and vaccines and have been key to the nation’s ongoing economic recovery.

“Our nation has faced significant challenges before, and we have always risen to the occasion and prevailed. It’s the American way,” Dole wrote early in the pandemic, in a June 2020 opinion column. “I remain confident about our resilience in response to the COVID-19 crisis, and much of this confidence arises from legislation that I co-authored in 1980 with my former colleague — the late, great senator from Indiana, Birch Bayh.”

The Bayh-Dole Act is codified in 35 U.S.C. § 200–212, and implemented by 37 C.F.R. 401 and 37 CFR 404. Also known as the Patent and Trademark Law Amendments Act, it permits a business, university, or nonprofit institution to elect to pursue ownership of inventions arising under funding agreements with federal agencies. It also authorizes federal agencies to pursue patents and outlines conditions for licensing of federally owned inventions, which include prioritization of small business licensees and intent to manufacture any resulting products in the United States.